Nickolas Ask is originally from Oslo, Norway. He will receive a joint JD/LLM from Fordham University School of Law and Université Paris II Panthéon-Assas in 2019. While in law school, Nickolas has gained experience at Wikborg Rein, a Norwegian law firm, as well as at the United Nations' ISIL and Al-Qaida Sanctions Committee. He holds a Bachelor of Political Science from City University of New York-Hunter College.

Henry Byrne was born and raised in the Chicago Suburbs.  He graduated with a B.S. from Loyola University Chicago. After college, he attended the Marine Corp’s Officer Candidate School at Quantico Virginia and was commissioned upon completion. Currently, he attends Chicago Kent College of Law.  He will serve as a Judge Advocate Officer upon graduation from law school.

Born and raised in Hamburg, Germany, Niels pursued his bachelor degree in Philosophy & Economics at the University of Heidelberg. This combination is what continues to motivate him, as economics and politics influence the legal field to a great extent. After internships in Shanghai, Brussels and Rome, Niels decided to specialize in the area of European law, since he wants to positively shape the role of Europe in the world of today and tomorrow. He successfully completed a Master 1 in International and European law at the University of Toulouse. Currently, he is following the LL.M. program in European law of the University of Paris II Panthéon-Assas.

Throughout his studies, he was part of many professional organisations, among which Geneva Model United Nations, Assas Legal Innovation society and the Assas Common Law society. He likes to engage with the public and organized several legal debates about Brexit and the European Union at the University of Toulouse. Niels enjoys thinking outside of the box and combines ideas from different disciplines, namely economics and law. During his academic and practical career he experienced different cultural environments, these experiences strengthened his belief in liberty and equality, everybody should have the chance to achieve their true potential. Niels speaks German, English, French and Italian.

David was born and raised in a small village close to Munich, Germany. He began his law studies at the Ludwig Maximilians Uiversity (LMU) in Munich and studied there for two years. Via the LMU he participated in the ERASMUS program of the National and Kapodistrian University of Athens for one year. Back in Germany, David changed university and studied at the Freie Universität Berlin (FU) from now on, where he also successfully graduated in law.

Two years of legal traineeship at the Berlin Appellate Court followed, which included a three months study visit at the European Union Agency for Fundamental Rights, located in Vienna. David also worked for the German Federal Justice Ministry – section European Law – during his legal traineeship. His focus though was and is on Asylum and Human Rights. As a lawyer in this field, David worked for one and a half years in a law firm in Berlin after he successfully passed his bar exams. Because of the ever closer entanglement between national Asylum and Human Rights with European Law, David decided to apply for the LL.M. in European Law at University Paris II – Panthéon Assas, where he is currently studying.

Josephine Kovacs grew up in Portland, Oregon in an immigrant household. She traveled between Oregon and Hungary often, before moving to New York City for college. She was shaped by this geographical pull from the west coast and east coast, as well as Europe. She graduated cum laude with a Bachelor of Arts in Sociology and Human Rights from Barnard College of Columbia University in 2016, focusing on human rights violations within the US prison industrial complex. During her time there she was awarded the Forest Foundation Fellowship, which allowed her to work with Justice At Work, a legal non-profit helping low-wage immigrant workers in Boston, Massachusetts.

Josephine is currently a third year law student at Boston University School of Law, with an expected Juris Doctor and LL.M. in European Law from University Paris II - Panthéon-Assas in May 2019. During her time at BU she was a member of the International Law Journal where she wrote about the interplay between fertility tourism, statelessness, and human rights. She has worked at the Harvard Prison Legal Assistance Project representing prisoners in misconduct hearings and at a mid-sized civil litigation firm in Portland, Oregon as a summer associate. She plans to return to Portland, Oregon to take advantage of the great outdoors and hopes to retain her global view of the law. She loves hiking and yoga.

Born and raised in Copenhagen, Denmark, Mads graduated from the University of Copenhagen in 2017 with a bachelor’s degree in law. During his fifth semester, Mads participated in an exchange program at Maastricht University, European Law School, focusing on comparative studies in the field of contract, property and constitutional law. While writing his dissertation on mortgages and creditor´s rights he interned at the Permanent Danish Representation to the EU, Justice and Home Affairs Section, in Brussels.

Upon returning to Denmark, Mads commenced a master’s degree at the University of Copenhagen while at the same time working as a legal assistant at the Danish Ministry of Justice (Department of Civil Law). Mads is currently pursuing a LL.M. degree in European Law at the Université Panthéon-Assas Paris II and is set to graduate from a second master’s degree at the University of Copenhagen in 2019. Throughout his academic career, Mads has been particularly engaged in the European Law Student Association, acting as Director and later Vice President for the Student Trainee Exchange Program. 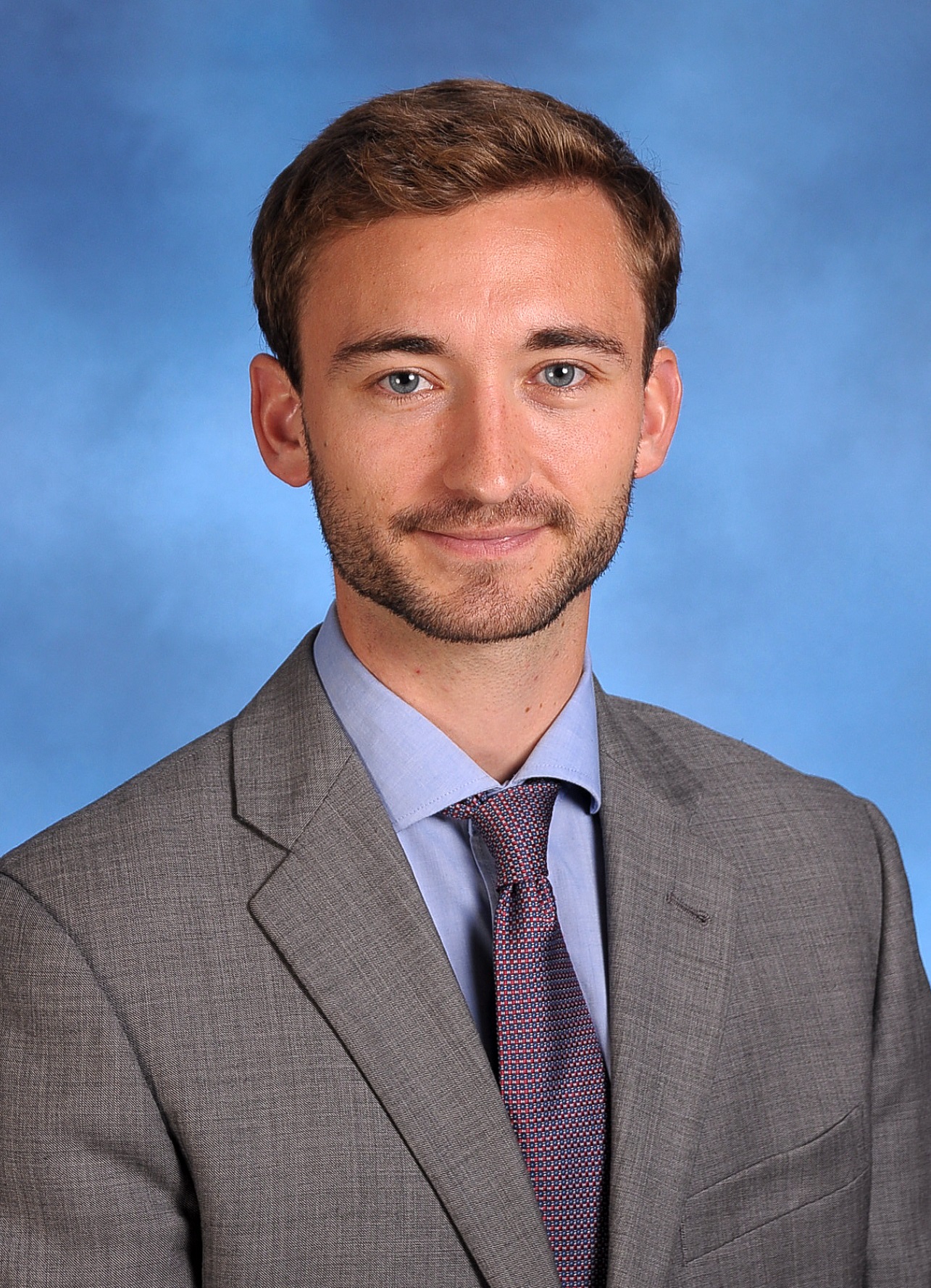 Patrick Leisure is a full-time law student at Boston University School of Law and is set to graduate in the spring of 2019 with a JD. He has dual nationality with the United States and the Czech Republic and was born in Charlottesville, Virginia. He attended the College of William and Mary for his undergraduate degree where he studied Economics and History. He studied abroad in South Africa and the UK. In the interim between undergrad and law school, Patrick interned at the United Nations Institute for Training and Research in Geneva, Switzerland and also lived in Rome, Italy for a year where he worked as a teacher. He spent his past summer working at the Mechanism for International Criminal Tribunals in The Hague, the Netherlands. Patrick Loves to travel, be outdoors, and play all sports.

Andrew Jon McKenna will graduate with a Juris Doctor from the University of California, Hastings College of the Law in the spring of 2019. He attended the University of Utah are received bachelor’s degrees in Middle Eastern studies and International Studies with a minor in political science and a certificate of criminology and corrections.

Jay was born outside of Accra, Ghana. He grew up in Ghana as well as in the United States. Jay graduated from the University of Colorado at Boulder with a Bachelor's degree in political science. Before attending law school, he worked at various refugee-centred NGOs in the Middle East and Africa writing about economic development and armed conflict. In addition to attending the LL.M in European Law at Université Paris II - Panthéon-Assas, Jay is a JD law student at Boston University School of Law. In Boston, he was an intern for the Massachusetts Attorney General's White Collar Crime Division of the Criminal Bureau. He volunteered his time at Boston University's Human Rights Clinic. He most recently worked at the Office of the Vice President and General Counsel of the MacArthur Foundation in Chicago, Illinois in tax-exempt and non-profit law before attending the LL.M in European Law. Jay will sit for the New York Bar."

Piers Reilly recently graduated with a Law degree from BPP university, England. During the course of his bachelors degree, he was president of the mooting society for two years, engaged in various pro bono activities, and participated in youth outreach programs. Piers has also undertaken several internships in London at international law firms, and has interned at a Irish law firm specialising in EU law. Currently, he is writing his thesis on the topic of labour law and how changes in the labour market impacts human rights.

Joseph Stern is an American attorney from Los Angeles, California.  He has always had a passion for justice, and wanted to be a lawyer before he could even spell the title correctly.  Joseph studied Business and International Relations pre-law at the University of Southern California, and developed what he learned in the classroom by working for organizations such as the Democratic National Committee and United Nations before deciding to return to school to earn his Juris Doctorate from Loyola Law School in 2018.  Joseph is thrilled to be part of the Pantheon Assas LLM Program, and hopes it will better prepare him for a career in European Commercial Law.