The students from the LL.M. in European Law for the academic year 2015-2016 had the opportunity to participate in the annual class trip to the Court of Justice of the European Union in Luxembourg.

The first day of seminars was conducted at the Academy of European Law (ERA). The day was divided into three seminars. Luca PRETE presented the first seminar, which focused on the decentralized enforcement of Union law. Mr. PRETE is Legal Secretary in the Chambers of A.G. Wahl in the Court of Justice. The second seminar on the centralized enforcement of Union law was presented by Felix SCHATZ, Legal Secretary at the Chambers of Judge Kreuschitz in the General Court. Ziva NENDL, Legal Secretary at the Chambers of Judge Ilesic in the Court of Justice, presented the third and last session. Ms. NENDL discussed general principles governing the law of the Institutions. The speakers, mainly utilizing case-law, offered a wide range of insight regarding the Court's practices, as well as their own views according to their experiences. In addition, they identified challenges that the Court faces on a regular basis as well as potential changes to enhance facilitation of the judicial procedure.

The group spent the following two days at the European Court of Justice. Mr. H. COHEN, trainee of Protocol and Visits Directorate gave the group a briefing on the case RENV Parker Hannifin Manufacturing and Parker-Hannifin/ Commission (T-146/09). The hearing was lively and the Court procedure was even more informative for the students. The rest of the day was very inspiring for the group. The class enjoyed the privilege of meeting with Advocate General, Mr. M. SZPUNAR. The students had the chance to enrich their knowledge onthe work and role of an Advocate General in the functioning of the Court of Justice. Advocate General Szpunaroffered thoughts on future measures the EU might take to address the EU judiciary's increasing responsibilities. More importantly, he was more than glad to accept several questions from the students, which led to a fruitful and productive discussion. The groupalso met with Mrs. E. Von BARDELEBEN, Legal Secretary in the Chambers of Judge Gervasoni. She informed the class of recent changes in the functioning of the Court. Mrs. B. PATORA, Administrator in the Library Directorate, gave a presentation regarding the Library of the Court, as well as a practical demonstration of the research possibilities offered by the classification scheme and the online catalogue of the Library. This presentation led to a guided tour of the Library and an hour of individual research for each student.

During the second day at the Court of Justice, the class attended the hearing for the case Verein fur Konsumenteninformation (C-127/15). The case was of exceptional interest and the procedure in front of the Court was an educational experience. The group had also the honor to meet with Mrs. E. SHARPSTON, the Advocate Generalfor the aforementioned case. The session was particularly fruitful and informative for the students who had the opportunity to discuss Mrs. SHARPSTON's unique approach as an Advocate General. Moreover, that day the group met with Mr. C. ORO MARTINEZ, Administrator, Research and Documentation Directorate. Mr. MARTINEZ explained the importance of translation for documentsthat reach the Court, in order to allow citizens of the Union to properly exercise their right of access to justice. Later on, students also had the opportunity to meet Judge Rosas, who shed light on the relationship between international law and European Law, which was again followed by a lively Q&A session. Lastly, Mrs. V. TOMLJENOVIC, Judge at the General Court, presented on the highly anticipated structural changes of the General Court, as well as future plans regarding the judicial system of the Union as a whole.

Students left Luxembourg with unforgettable insights into the judicial system of the European Union and with extremely valuable knowledge of EU law, gained through unique practical experience from our various speakers which complement the academic study of the LL.M. in Paris. 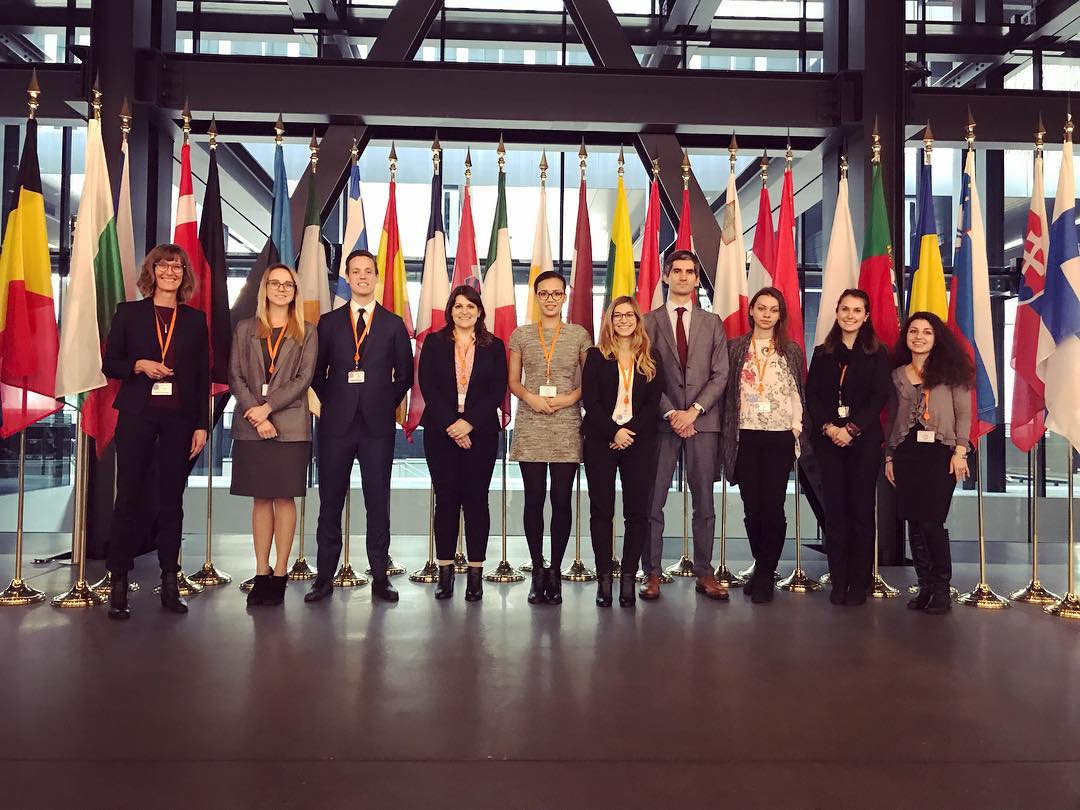 One of the best things about studying in Europe is how accessible so much of the continent is. As part of our degree program, the University program brought students to Luxembourg for a week to attend seminars and visit the European Court of Justice.

The Court of Justice of the European Union is made up of two courts - the General Court, which is a court of first instance and hears cases brought against any of the EU institutions (the Commission, the Council, etc.) by member states or individuals, and the European Court of Justice, which is the highest court in the EU, is responsible for interpreting and applying EU law, and handles all preliminary rulings and appeals from the General Court.

The Court of Justice is half a legal institution, half a giant interpretation centre. Our guide for the week told us that the average ECJ employee (including general staff) speaks 7 languages fluently. Hearings are probably the most incredible language feat that the Court pulls off. Though French is the official language of the Court (all judges and Advocate Generals speak French in hearings), attorneys and parties before the Court plead in their national languages.

When the Commission (the executive office of the EU, responsible for implementing ECJ decisions and proposing legislation, among other duties) pleads in a case as well, the attorneys for the Commission can plead in any language they choose.

The courtrooms are lined with two floors of glass-walled interpretation boxes. Each seat in the courtroom, including all the seats for the attorneys, judges, reférendaires (legal secretaries), and the audience, is equipped with a small device that loops around one ear and is worn a bit like a headphone. A box in each seat allows you to change the channel, and the channel for each language is listed electronically on the front of each interpretation box. Basically, a hearing proceeds as normal, but at any given time, up to 5 or 6 different languages could be being used! Everything happens in real time- each interpretation box has anywhere from 2-4 interpreters, depending on the languages being used. Not every language is interpreted in every hearing, requests are sent in for which languages to provide for each hearing in addition to the languages the attorneys, parties, and judges will be using. Once things begin, the interpreters translate as quickly as the speakers speak- there really is zero delay!

We spent a full day attending seminars at the Academy of European Law in Trier, Germany and two days in Luxembourg at the Court. We attended a briefing of the case we were to hear that day by one of the judge’s referendaires. The case we heard on Day 1 concerned a preliminary reference from a Hungarian Court about the mutual recognition of judgments in criminal matters. The case involved a Hungarian national who received and served a sentence for attempted theft in Austria and how the procedure under Hungarian national law for transposing this sentence interacted with the Treaty on the Functioning of the European Union (one of the major governing EU treaties). The case on Day 2 was a preliminary reference from a national court in Spain concerning employment contracts and workers’ rights. The individual party concerned in the case was present with her attorney, as was the company in question, and the Spanish government and the Commission. Oftentimes, in preliminary rulings, just the government attends, and the Commission gives a pleading as well, so it was neat to have so many parties present and pleading and to hear their different opinions.

In addition to attending hearings, we had seminar sessions with attorneys from the Research Department of the Court, with Judge Tomljenović from the General Court, and with Roland Klages, legal secretary to AG Spzunar (who was unfortunately sick). The presentations were all amazing- in particular, Roland KLAGES spent much time with us, answering all of our enthusiastic questions, and Judge Tomljenović spoke candidly about women in the Court. 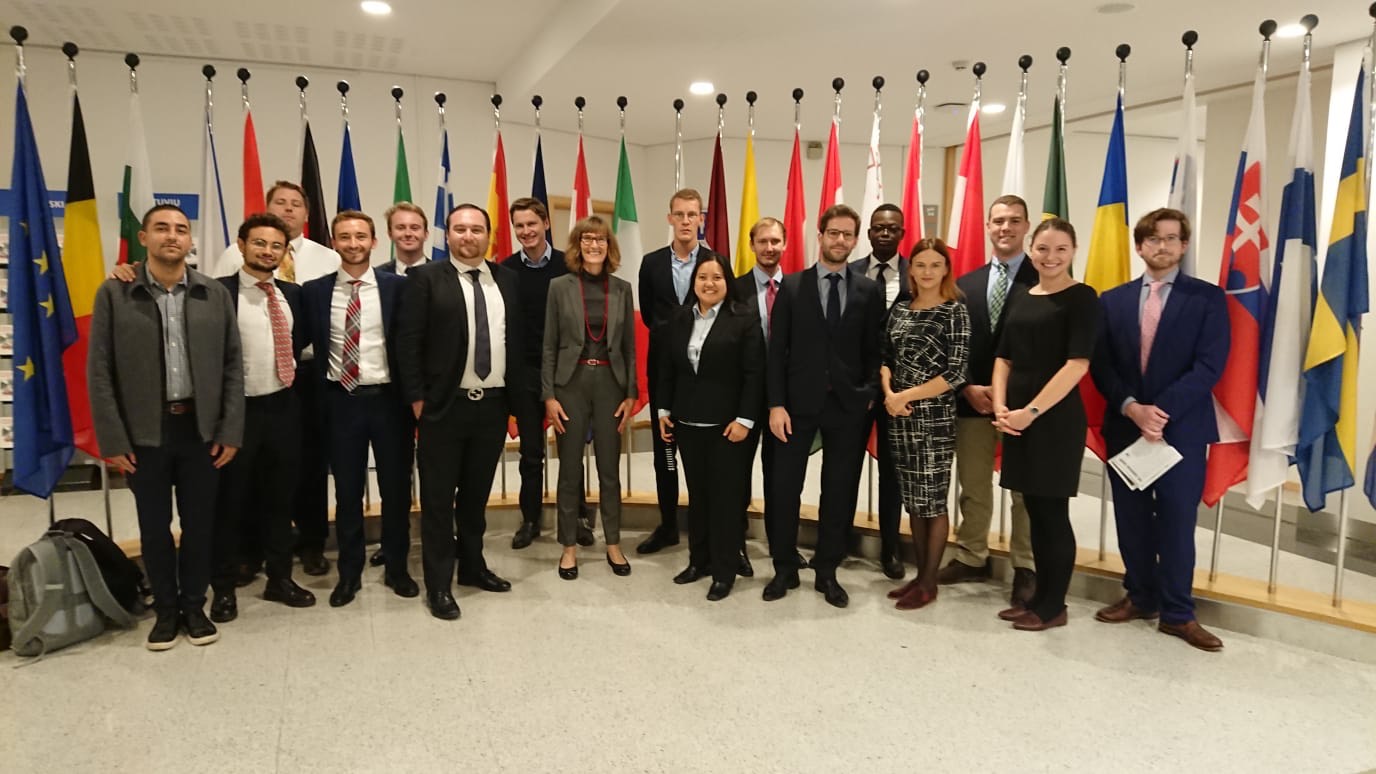 Early in the course, we went on a day trip to Brussels where a program of educational visits to the European Parliament and Commission gave us an overview and first-hand experience of the EU institutions which we will be studying.

We started our day at the European Parliament where our group listened to a presentation about the history and current status of the EU, how the Parliament works, its evolution and the impact it makes across Europe and the world. By the afternoon, we moved to the Commission’s building where we received a detailed presentation about the European Commission as the political executive of the EU by Mr. Marco LOPRIORE, a member of the speakers’ team, DG for Communication. This was followed by two presentations on select fields of law in the EU — Competition Policy and Asylum Law. Our speakers were Ramona Ianus from the Sate Aid Policy and Case Support Unit, DG Competition and Borbala Szigeti, from the Asylum Unit, DG Migration and Home Affairs.

This experience provided an excellent opportunity for exposure to various units and functions of the Commission and Parliament and it gave us a glimpse of how the concepts and theories that we are learning in class is put into practice. For a non-EU citizen, this experience was particularly helpful because it created a clearer picture of the structures of the European Union's institutions and the EU’s presence in Brussels.